So I'm currently finishing up year 10 of teaching and year 6 of implementing TPRS and CI strategies in my classroom.

Some things that I experimented with in Spanish 1 (my only level this year) were:

Here's a brief reflection on each.

1. bumping up the level of embedded readings - I really like pushing my kids in their reading abilities. I think this is a huge strength for TPRS  and CI classes. While part of me thinks that I might have introduced reading a little too early this year, I am amazed at the comprehension abilities of kids. It's also interesting to see the disconnect between comprehension on paper and lag with production (both in writing and speaking).

SLA research has been saying this for awhile, but it's always interesting in the field to see truly how much kids can understand without being able to produce!

2. finding ways to practice 1st and 2nd person forms with actors -
In previous years, my kids would get so comfortable with 3rd person singular that it was really hard for them to ever get away from it.  This year I tried to expose the students to first / second person forms more with pop-ups.   I was never trained on that at the TPRS training sessions  I attended many years ago.  So I don't know if I really have been doing it well, but I have noticed my kids using WAY more first person and second person forms this year.  Of course, they now also use the first person instead of the third person. Can't win! One form always seems to dominate novice learners. At least it's not dreaded "gringo" infinitive. Haha.

3. varying forms of verbs and popping up the grammar about them -

This was similar to previous. I generally believe in using unsheltered grammar (of course I always do my best to circle with words that we've been going over in class and circumlocuting) and exposing the kids to the language as much as possible (even subjunctive, perfect tenses when possible). I don't expect them to produce them, but if I can use them once in awhile the kids might actually notice them later and/or use them sooner.

4. using phrases/expressions that I haven't used in Spanish 1 yet -

One of the main ways I did this was through using a "secret password" to get into my classroom. Last year kids would shake my hand and say "good morning/afternoon" in target language while giving me eye contact.  This established a nice tone.  But this year I upped the ante with a secret pass code.  Every 2-3 weeks (block scheduling), I would change the phrase and announce to the class, "I have a secret" and they would put their hands up to their ears to listen and I would walk over to my secret password board and let them know about the new phrase.  I might even have them repeat it with me a few times (not because it helps with acquisition, just for fun).  We might say it in different ways too.  Many passwords were rejoinders and useful expressions in class and I have to say it was very nice to have other stock phrases to refer to this year (how cool, that's enough, what nonsense!, good job, you are right, etc). I think that I will continue with this next year! See more in secret password.


5. trying out New Blaine Ray materials and ditching them after semester 1
I really wanted to like the new Blaine Ray materials, but they were missing the magical, unpredictable silly details that I became accustomed to when I was trained in TPRS. When a HS student calls a story "contrived", that's telling.  I really want to find some sort of curriculum though. But next year I'll be starting over and using what my new district will be teaching with. No disrespect meant to Blaine Ray or his materials! See this post for more info.  Wish me luck.

6. "hanging out" with my students (easy to do with 90 minute blocks and when students want to  talk even a little bit about their lives) -
This is really hard and depends on the class. I could never force it, but in classes where I tried to talk to them about their lives, I noticed that it helped the class become more of a family. While we did PQA at the beginning of the year, it's REALLY hard for me to do that on l the block schedule and keep up the momentum.

But my success with just talking to kids about their lives (in most classes) and seeing their reactions is another thing that makes me want to try out the Persona Especial interview next year.

I also think that this is what really helped students feel cared for in class.

In short, this year I have gotten a lot of comments from students about how much they enjoy my class. Some even wrote (in their last writing assignment) about how much they loved class this year and how they really learned a lot.  It warms my heart to see that all that I tried to do was appreciated (even if only by a select few).

There have been many times this year where I haven't felt very effective due to departmental and circumstantial constraints.

Nevertheless, what students will remember is how I made them feel and I believe that this year, I was quite successful in making students feel welcome, and cared for and important. Some might have slipped through the cracks (despite my semi-best efforts), but I believe that having students so upset by my leaving for another school next year and having some stay after class and shaking my hand and letting me know how much they loved my class and how more classes should be like it speak leaps and bounds.

While the final writing prompt was to rewrite a story from class or to write a new story, one girl decided to write the following. I admit I shouldn't have read it before another class as I found myself a little "verklempt".

Please don't judge any spelling or grammar mistakes. I don't.

This was completely unscripted and was the result of very little formal grammar instruction and a lot of whole-language teaching. She wrote this without knowing she was going to have to write and only after a year of instruction. I understand all of it and therefore, communicatively speaking, it was a SUCCESS!  And incredibly thoughtful. 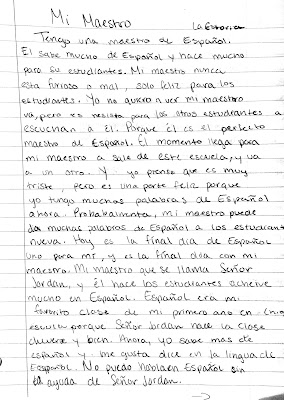 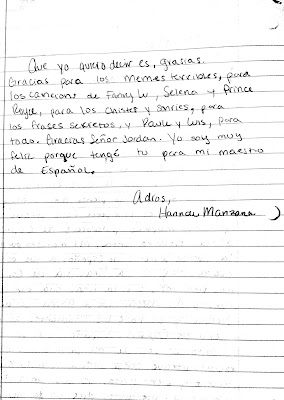 .
And next year, off to teach in another high school! How bittersweet, especially after such a kind an thoughtful note.

Posted by Reflections of a Spanish Teacher at 11:58 AM