After the fun with the previous mini-unit on el chico del apartamento 512, I thought this would be a logical progression and I've wanted to use this song all year ever since seeing that Kara Jacobs did something with it.

So Bomba Estéreo came out with this great song called "Soy yo" (I am me) that is a really positive song about just being yourself. While Kara used it in the beginning of the year for repetitions of "SOY", I preferred to use it later on when my kids would have more language and I could relate it to deeper discussion in class about being who you are.  I know my stuff doesn't hold a candle to hers, but I think my students enjoyed it for the most part, which was nice since it's the end of the year.

Before showing them the reading, I brought up the first one of the year and told them we could warm up real quick. They read it without any problems. One student said in English, "Wait, that was so easy!" And I responded to him, "It is now. But when we first went over it, it was a little bit hard for you!" I wanted them to realize HOW much they have been exposed to this year in the Target Language and how far they have come in one year.

I really wanted to review some of the physical descriptions vocab, family vocab, places vocab, activities vocab, etc. The thing I love about storytelling (TPRS) is that you can really revisit things all the time because they can come up naturally in stories unlike with a textbook. 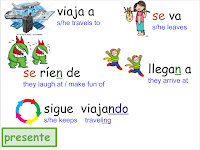 You might notice how I was reusing some phrases. But I made sure to use a different form of them in this story or added a different "ing" because just going over something once is NEVER enough for acquisition in my experience for lower levels. They need to constantly be exposed and re-exposed to vocabulary/structures throughout the year for long term retention.  The stuff they only hear once (for most kids) will most likely be forgotten to make space for more frequently used language.

Anyways,  here's the rough plan I used with links to the activities mentioned. It's bare bones, but hopefully it will inspire you!

Posted by Reflections of a Spanish Teacher at 6:35 PM