*this is my attempt to keep track of what happened while I was at my very first NTPRS in Reno, Nevada

It was really neat to see! I have been using embedded reading now (or trying) for three years.

If you aren't familiar with it, it's simply creating a simple version of a text and then a harder (bottom-up) or using a hard version of a reading and making it more accessible in different versions (top-down).

Michele Whaley did a good job breaking it down and I could see how important it really can be to help kids be successful. So thankfully it reinforced what I did for my classes.


I also really liked a story idea she had about a girl who sees a boy, he doesn't look at her, she walks towards him and he pees. Then as she fleshes the story out in future versions, he turns out to be a dog!

I tend to leave out the ending until the last version. But I liked the twist here to give the ending but make it more of a detective story where they want to read more versions to see WHY it happens.

She also talked about some different phrases that Justin Slocum-Bailey likes to throw into Embedded readings such as:


And I liked how she gave different activities that we could do between versions of embedded readings to help break them up:


We used Quizlet live to review the story in groups. I admit I have heard of it, but tend to shy away from technology, especially if it will only be for word level type discourse. But she put lines in the story and the groups had to find the correct translation (in English) of the Russian sentences from the story! I might have to try this in the coming year since we will have 1:1 chromebooks.  Anything to get an additional pass of the reading material!


Closing Ceremony:
So I was helping with the AV at the closing ceremony because there might be a need for someone since since the super talented renaissance man, Michael Miller, is retiring from doing AV at NTPRS after helping out for (I want to say) 16 years?!

It was stressful as always, but Mike Coxon and I were sitting up on the floor near the stage making sure everything went well! Minus a video hiccup or two, we got it all to work and I thought it was a nice close to a really special week.

I would have liked to sit with teachers I had met over the week one last time, but it was an honor to help out.


Tahoe, In & Out
Later on in the day, some awesome people were going to Tahoe, so Mike Coxon and I went along after some much-needed down time.  It was a great way to end the week, with some interesting people, still talking about what we do in our classes. I swear I have never met so many teachers  who love what they do so much that they talk to others about it whenever possible. It was so refreshing to not feel crazy for thinking about my classes and trying to be intentional with storytelling, CI, etc.

Afterwards we went to In & Out for dinner. It was awesome as usual and Mike taught us a secret code to order french fries with all sorts of extra stuff on them.

It was especially nice because I haven't had In & Out in a LONG time. It's awesome (even if people doubt that I ate my hamburger).

Here's a pic of our group (Mike isn't pictured though for some reason)!

Jackson and I were photo bombing in the background!

Videogames
We got back to the hotel and Mike and I met up with my new colleague, Bess Hayles.  We ended up playing video games in the arcade. It was way more fun than a casino would ever be for me and we played a 3d shooting game. It was intense. See attached photo of Mike and Bess! 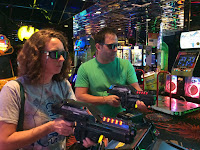 All in all a good end to the week with awesome, intentional educators who inspire me to keep doing what I believe is right in my classroom for my kids to acquire the language.

But there was one more highlight to my trip as I left for KC the following day!
Posted by Reflections of a Spanish Teacher at 7:39 PM